What Did New World Latest Update Focus on 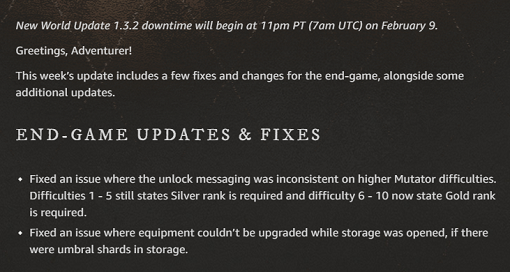 It is not difficult to see that the main content of this update is still fixes, and its theme focuses on endgame. Maybe some players have no ideas why AGS focus on endgame. This has to do with AGS' idea of making the New World unique.

While New World's PvP elements are a popular and interesting mechanic, they're not as inclusive as players would like them to be. The 50v50 war mode looks like a massive, thrilling battle, but that's not the case when players consider how many people there are throughout the game. Additionally, while the New World contains 15 territories, only 11 are up for grabs for control. Coming to war is not so easy. Despite being one of New World's biggest endgame features, War Mode is only available if the company's leadership grants players a place in a 50-player group and doesn't remove them after they sign up.

It doesn't seem like there is an immediate fix for this issue, and the fact that players won't even know how restrictive it is until they've already put in the hours to get there has created a sour taste in the mouth of many of those on New World's servers. Of course, there are other elements to New World's endgame, like the 20v20 PvP Outpost Rush which unlocks after reaching the level cap of 60. There are new weapons, bosses, and expeditions, too, but considering how a large portion of the game's focus is on territory capture and the success of Companies and factions, players find it incredibly frustrating that this aspect is so limited and exclusive.