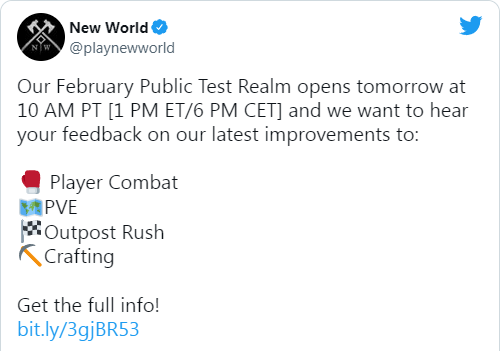 Outpost Rush is a 20 vs. 20 battle set in a primordial river basin filled with forgotten ancient technologies and hidden sources of Azoth. Players and their team will vie for control of strongholds and strategic resources, requiring combat prowess and collective wits to win.

Outpost Rush can be done solo or with a party of up to five. Currently there are three upgradeable outposts:

Sol Outpost - located in the center of the map.

Now there are some changes to Outpost Rush's score and test rewards. "The scoring mechanism for contributions has been reworked," the developers explained in the patch notes, with three key updates: Dealing damage now increases player score, and killing enemy players and AI enemies has decreased score.

As for player combat, the new PTR introduces changes to weapon swaps, which can now be deployed while reacting, dodging, traversing, and using consumables -- and, most importantly, actions that don't interrupt these. However, to "prevent instant weapon spam", the exchange has a 1 second cooldown.

You can also queue weapon swaps and attack moves at the same time. For example, "If you press weapon swap during attack recovery, then immediately press the skill key, the weapon will cancel the frame swap on the first swap, and then immediately perform the desired ability," as the developers explain. "While there is still a buffer and cancel window for motion, this change will make the combination of weapon swapping and ability activation easier and more reliable to use."

About server merges, Amazon Game Studios is preparing their first server merge of 2022 between the Avalon and Ramaja worlds in the Central EU region. Although this is only the first merge of 2022, Amazon Game Studios states that many more are on the way. If you happen to be in one of these districts and want to preserve the history of the game in New World. Then we need to make a transition plan soon.