The developer has announced the New World Public Test Realm on November 9 and also waiting patiently players’ new feedback. The PTR will allow players to instantly level to certain ranges, and provide appropriate gear, and anyone who already owns the game on Steam will have access to it. Many players constantly give official feedback on their problems during the past week, such as being unable to create characters or being unable to chat or trade. But unfortunately,  most disappointing thing for them seems that duplication exploit appears again!

Then the official measures immediately shut down the trading system as before. New World community manager Tosch has posted on the forum saying, “We are aware of a possible duplication exploit that has been circulating the forums and social media. We are disabling all forms of wealth transfer between players (i.e. sending currency, guild treasury, trading post, player to player trading) while we investigate. Any player that has engaged in the use of this exploit will be actioned against.”

And they explained the work they have done for this type of accident.

“ It has taken us time to unravel and identify where the items and coin landed, but as of November 15th, we are glad to report we have permanently banned 460 additional players from either the original trade or newer housing exploits. By doing so we were able to remove 98% of remaining duped items and Coin in the game. The small amount of duped items that remain were a result of players who stumbled upon the duping issue but did not take exploitive action, and will not be banned”. 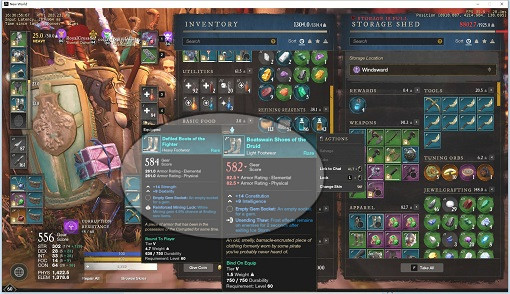 After the exchange is closed, a Chinese player posted the above picture on Baidu Forum. And he said: It’s the result of the closing of the exchange.

Some other funny stories are shown below:

So, today, we didn’t seem to see too many positive reactions from players. What is more is to continue to be shrouded in the melancholy atmosphere of various bugs. Will it get better tomorrow? Let us look forward to the update together.