The girl who was tortured by experiments in the past is finally thriving under the care of Sumeru Forest; if you are interested, you can read on for her Abilities, Talents, Constellations, and Materials.

Passive talent: a new leaf state appears around, and every two damages will have Dendro's energy attached 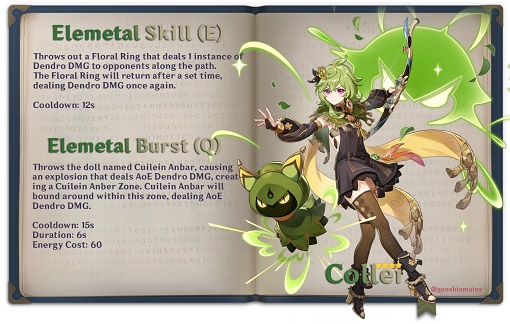 Trusty Cuilein-Anbar comes to save the day!

The duration of the Cuilein-Anbar Zone is 6 seconds, and the cooldown of the Burst is 15 seconds. It costs 60 Energy to cast.

When in the party and not on the field, Collei’s Energy Recharge is increased by 20%.

Through Hill and Copse

The Passive Talent Floral Sidewinder is changed to this:

The Floral Ring will grant the character the Sprout effect from Floral Sidewinder upon return, dealing 40% of Collei’s ATK as Dendro DMG to nearby opponents for 3s.

From the moment of using Floral Brush to the moment when this instance of Sprout effect ends, if any of your party members triggers Burning, Quicken, Aggravate, Spread, Bloom, Hyperbloom, or Burgeon reactions, the Sprout effect will be extended by 3s.

The Sprout effect can only be extended this way once. If another Sprout effect is triggered during its initial duration, the initial effect will be removed.

Requires you to have unlocked the Floral Sidewinder Passive Talent.