Fortnite Chapter 1 has 10 seasons, Chapter 2 has 8 seasons however there are only 4 seasons about Chapter 3. “Paradise” was special for Chrome theme. Epic chief creative officer Mustard has always made the player more of a witness to events than a central character, allowing the story to be told through non-player characters the player may encounter. The design of this long-term narrative is flexible, and combining narrative elements can prompt the development team to plan new ways. How will Chapter 4 develop? Will the gameplay and content be very different from chapter 3? What we got is the following information.

First, Fortnite Chapter 4 Season 1 is set to begin in early December. The latest leaks suggest that there will be a two-day downtime since the first day is scheduled for December 5, and the finale live event, called "Fracture," is planned for December 3. And the fourth chapter will arrive with a new map that will feature the core characteristics of the upcoming chapter while spicing up the map.

Second, the map will change. FitzyLeaks' map concept looks very similar to the Chapter 3 map. However, the Zero Point is now completely exposed, and there are many new and modified locations on the island. And leaked locations for a possible LTM map codenamed 'Demeter':

Third, new skin. While that map, or the upcoming battle pass skins, have not yet leaked, we do have what looks to be the first official Chapter 4 skin leaked from the most recent patch files. The skin here is supposed to be the Chapter 4 starter pack, and the skin is named “Mina Park,” who is a metalcore musician. Her kit comes with a giant metal axe called the Ruthless Claw and back bling that’s a black heart with wings called Spikeheart. 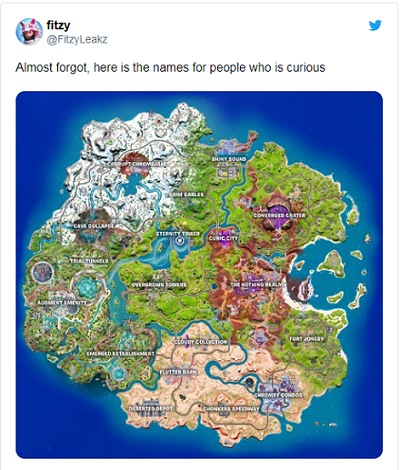 Besides, more details about gameplay must would be leaked later, just waiting for good news and hoping Epic will be ready.