Zico is no stranger to the long-running gaming series, many will remember banging in free kicks with him in kick-off mode with Classic XI, with Zico being one of the star players on that side. Now you can use him in FIFA Ultimate Team (FUT), which is exciting for fans across the globe.
Zico will join a plethora of Brazilian Icons in FIFA. Ronaldinho, Garrincha, Kaka, Ronaldo and Roberto Carlos are just some of the elite players that already feature, so Zico will be in excellent company.
So, let’s have a look at what Zico’s Icon card could look like in FIFA 23 Ultimate Team. 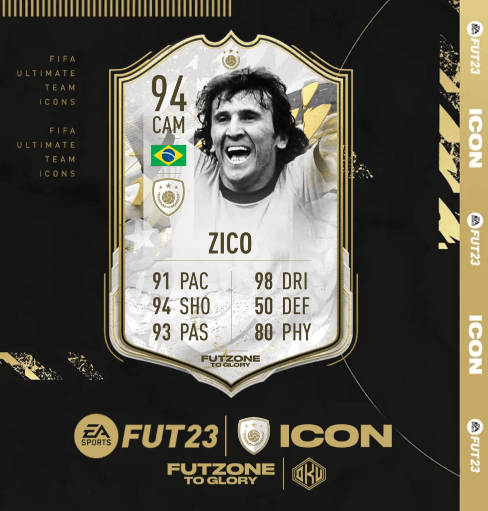 Now, this is merely a prediction, but he certainly looks incredible.

The silky Brazilian playmaker was a master with a football. The ball stuck to his feet like glue, with this being reflected in his predicted 98 dribbling.
There’s also one thing that he’ll surely excel at, with that being Zico’s free-kicks. He is widely regarded as one of the greatest free-kick takers of all time, so we imagine his set-piece statistics will be absolutely off the scale.

Zico’s Iconic Career
Arthur Antunes Coimbra, otherwise known as Zico, is one of the greatest players in Brazilian football history.

Zico only played for three clubs throughout his career. He began at Flamengo in 1971 and spent a glorious 11 years with the Brazilian side before moving to Europe, where he chose Udinese in Italy. He only spent two years here, as his heart longed for Flamengo where he returned to play another four years, taking his total time at the club to a remarkable 15 years.

He finished up his career in Japan, with the Kashima Antlers. He endured three years here before finishing his playing career in 1994. A fantastic 23-year stint where he scored a total of 192 goals in 332 matches.

He also shone for his national side Brazil. He played 71 times for A Seleção, scoring a very respectable 48 goals along the way.

Are you looking forward to using him in FIFA 23 Ultimate Team?